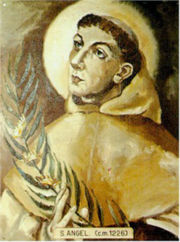 A priest and martyr born to Jewish parents in Jerusalem. His parents converted to Christianity after a vision of our Lady who told them that the Messiah had already come and redeemed His people. She promised them two sons who would grow up as flourishing olive-trees on the heights of Carmel; one as a patriarch and the other as a glorious martyr. When his parents died, Angelus and his twin brother John entered the Carmelite order at the age of eighteen. They already spoke Greek, Latin, and Hebrew.

Angelus was ordained in Jerusalem around the age of 26 and traveled through Palestine. Various miraculous cures were attributed to him. When he started to become famous for his cures, in humility, he withdrew to a hermitage on Mount Carmel for five years, when he was instructed leave to preach against heresies. He converted many, and at Palermo over 20 Jews sought baptism as the result of his preaching. He aroused the fury of a man in Leocata called Berenganus, whose shameful actions Angelus had denounced. As he was preaching to a crowd, a band of ruffians headed by Berenganus broke through the crowd and stabbed him mortally wounding him. Angelo fell on his knees, praying for his attacker. He died four days after the attack from his asked for his assassin to be pardoned.